Race with the Wind – Jim Jones

Available on CD and Digital 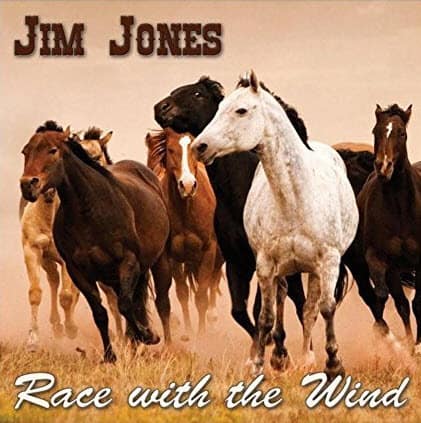 BUY THE CD
BUY ON AMAZON
In 2015, Jim Jones released his ninth album, Race with the Wind, a compilation of songs dedicated to the American West. The 2014 winner of the Western Music Association’s Male Performer of the Year, Jim sings about cowboys, horses, cattle, cattle rustlers and the beauty of the landscape of the West. His songs tell stories written from personal experience and keen observation of things that happen around him as well as his well-rounded knowledge of the West. “Race with the Wind“, is to be savored and enjoyed again and again.

Jim entertains with sing-along jaunty tunes filled with heart, as in “Good Ride,” and encourages us to look past the obvious to what makes us human in songs like “Common Ground.”  “She Left Anyway” captures the consequences behind tough choices made.  I’ve long been a fan of Jim’s music because what he presents is relatable, no matter where you “hang your hat.”   You could be working in the city, living in a suburb, or engaged in an authentic Western lifestyle and still his songs will speak to you.” — Bobbi Jean Bell, Purveyor of Western Music, OutWest Co-Host, “Campfire Café” Equestrian Legacy Radio; Host, SCVTV Presents “The OutWest Concert Series”

Order Race with the Wind by Jim Jones Today!