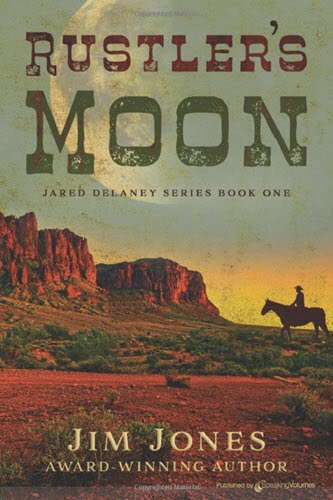 “By the light of the rustler’s moon,
Jared makes his stand and faces down his demons.”

Jared Delaney rides into Cimarron, New Mexico in 1878 looking for a job, a cold beer and a warm bed but instead finds himself in the crossfire of a vicious range war that forces him to choose sides. Orphaned by outlaws who shot down his parents in cold blood, Jared’s childhood is shrouded in a mysterious fog leaving him with no memories and nightmares of a malevolent voice and the coldest blue eyes he’s ever seen.

Jared doesn’t want to get involved in the local troubles, yet everyone he meets tugs at him to join their faction. On one side, there’s the tough old sheriff, the beautiful and outspoken schoolteacher, and a struggling rancher and his wife. On the other is a slick bartender, a “soiled dove” and the powerful patron who seems disturbingly familiar. By the light of the rustler’s moon, Jared makes his stand and faces down his demons.